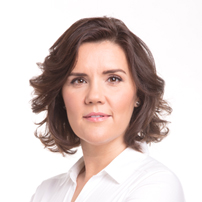 Assunção Cristas, born in 1974 in Luanda, is married and has four children.

She was part of the First Doctoral Course of the Law School of Nova University, Lisbon (1997), where she obtained her doctorate in private law, with the thesis – Contractual Transmission of Credit Law. The true nature of credit claims (Almedina, 2005). She’s been a Professor with NOVA School of Law ever since. She has a law degree from Lisbon University Law School (1997), where she was a monitor (95/96) and a trainee assistant (97-99), until she opted to dedicate herself exclusively to the preparation of her PhD at NOVA School of Law, benefiting from an FCT grant.

She was Director of the Office of Legislative Policy and Planning of the Ministry of Justice (2002-2005). Between the end of 2005 and the beginning of 2009, she dedicated herself exclusively to academia. In addition to the teaching component and national and international research, with participation in colloquia and publication of texts, she has also been involved in organizational aspects. Namely, she coordinated the SPEED (Permanent Research Seminar on the State and Study of Law), joined the Board of CEDIS (Centre for Studies in Law and Society) and headed the CNIACC (National Centre for Information and Monitoring of Consumer Conflicts), a body created in liaison with the Directorate-General for Consumers. She has co-authored several papers on consumer legislation.