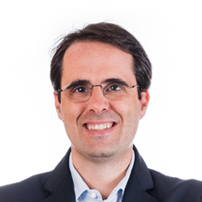 He is a Researcher at CEDIS – Research & Development Center on Law and Society, Director of NOVA Consumer Lab and NOVA Law & Tech.

He is the author (or co-author) of about one hundred and ten books and scientific articles, in the areas of civil law, commercial law, consumer law, civil procedural law, alternative dispute resolution and comparative law, with emphasis on the following works: Manual of Consumer Law (7. ª edition, 2020), The Limits to Contractual Freedom (2016, with reprinting in 2017), Manual on Alternative Dispute Resolution (2017, with reprinting in 2019) and Introduction to Comparative Law (2013, with last reprinting in 2019 and translation into Spanish in 2018).

Jorge Morais Carvalho has participated in over one hundred seminars, conferences, scientific congresses and colloquia or training actions in Brazil, Spain, England, Italy, Peru and Portugal.

He is the editor of EuCML – Journal of European Consumer and Market Law, Subdirector of Themis – Revista da NOVA School of Law and Coordinator of the Yearbook of NOVA Consumer Lab.