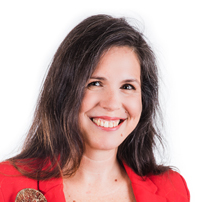 Associate Professor and Vice-President of the Pedagogical Council

Rita Calçada Pires has a degree and a PhD in Law. In the same year she graduated from the University of Lisbon (2002), she joined the V PhD Program of the NOVA School of Law, having obtained her PhD in 2009 specialising in Public Law, specifically with a thesis in the area of International Tax Law (International taxation of corporate income generated through e-commerce. To unravel myths and build realities. Almedina, 2011).

She divides her time between teaching and research in five key areas, exploring their interconnections: public finance, taxation, international taxation, social security and social economy. Using inter and multidisciplinary studies, the work focuses on the impact of law on society, mainly in public and economic areas.

She is a tax arbitrator at CAAD and considers that her professional experience in extra-university areas has deeply enriched the way she sees and teaches law. She has worked as a consultant in a small legal boutique and as Assistant to the Secretary of State for Solidarity and Social Security (2011-2013), where she developed her knowledge and skills, namely as a Member of the Working Group that studied the possibility of merging the Social Security and Tax Authority collection units; Member of the Group d’ Experts de la Commission sur l’ Entreprise Social (from the beginning of the group until its end: 2012-2018) by appointment of the Minister of Solidarity, Employment and Social Security; Participation in the Capacity Building Seminar: Financing business start-up by under-represented groups – OECD and European Commission (Trento, June 2012); Scientific Organization of the 1st Social Congress – Social Economy, Challenges of the 21st Century (29 June 2013, Estoril), having designed and written the Portuguese Charter for Social Economy, approved by the National Council for Social Economy; active intervention in structuring processes, namely, amendments to the Code of Social Security Contribution Schemes, the Basic Law of Social Economy, and the remaining legislative activity occurring in the social security system.

She took part (2015-2018) in a multidisciplinary research project (Macroeconomics, Political Science and Law), at the NOVA School of Business and Economics, financed by the Francisco Manuel dos Santos Foundation: Budget, Economy and Democracy – efficiency, sustainability, equity and democratic control.

Since 2019, she has been the National Expert in Social Security matters, in the field of MoveS Project, a consortium called EFTHEIA, which includes DELOITTE Consulting & Advisory, supported by the Law Faculties of the Universities of Ljubljana (SI) and Poitiers (FR) and which offers concrete and permanent support to the European Commission.