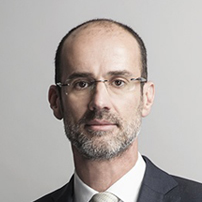 Rui Patrício joined Morais Leitão in 1994 and became a partner in 2005. He has been a member of the Board of Directors since 2008 and has held an executive position since 2012. He is the Coordinator of the Criminal and Compliance Department.

He is one of the firm’s most experienced lawyers in litigation, having most recently developed the area of criminal and misdemeanour litigation. He also has extensive activity in compliance, integrity, investigation, civil litigation and, sporadically, national arbitration.

The development of the criminal, misdemeanor and compliance areas at Morais Leitão has been accompanied by a university and teaching career. In the academic world, between 1994 and 2006, he lectured at the Faculty of Law of the University of Lisbon (subjects in the civil area and principally in the criminal area), and between 2007 and 2013, at NOVA School of Law as Visiting Professor, to which he also returns as Visiting Professor in 2020.

He currently participates in seminars and conferences, also lecturing on master’s and post-graduate courses, predominantly on criminal matters, criminal procedure and misdemeanours.

He has published his work on legal and justice issues, and is a contributor to several media outlets. He was Subdirector of the Revista da Ordem dos Advogados from 2018 to December 2019.

Rui Patrício was a member of the Superior Council of the Judiciary from May 2009 to November 2011 and a member of the Corruption Prevention Council from April 2017 to January 2020. He is currently a member of the Board of Directors of the Modern and Contemporary Art Foundation – Berardo Collection, by appointment of the Ministry of Culture, since September 2019 and member of the board of the Portuguese Compliance and Regulatory Observatory (OPCR).

He is co-coordinator of the Miguel Galvão Teles Institute, created in 2016.